skip to main | skip to sidebar

Like Carol Brady, I'm always telling the girls not to play ball in the house. And, just like Peter, they never listen! (Don't worry...this doesn't end badly like it did for Peter!)

Catherine had been begging all day to play with her soccer ball inside, but over and over again, I told her no.

...until I got a phone call from a friend that I really wanted to take!

Both girls promised to keep the ball on the ground at all times and to be really careful. I knew they had no intention of following through on their promises, but I also knew the soccer ball would occupy them for a few minutes.

It got pretty loud in their room, but I was able to tune it out. Nothing short of blood or broken bones was going to end this conversation prematurely!

At the end of our talk, I noticed the soccer ball was missing. I also noticed a guilty-looking little girl trying not to act suspicious.

It didn't take long to find the ball. It was in the same spot it's been in many times before. No, it was definitely not on the floor. It was on the top of their shelf, nestled in with some stuffed animals.

Okay, so they totally disobeyed and got away with it. Nothing was broken. No real harm was done.

And I was able to have a complete, uninterrupted phone call. Totally worth it! 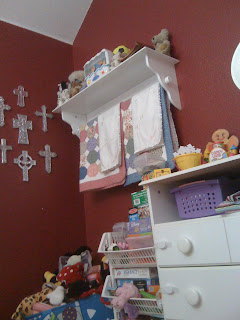 Don't you have those days when you'll do just about anything for a few minutes to yourself?
Posted by Leslie at 5:11 PM

My husband and I listened to our two battle it out in the living room over who could color where while we sat in our bedroom. it was the 200th fight of the day between those two and I was so done with the whole attempting to discipline thing. They eventually settled down and no one was severely hurt, so I don't feel too guilty about not breaking things up sooner.

I would have totally done the same thing! I am more than happy to break the rules on occasion as long as no one is bleeding!

Hope you have a great week!

I totally see it now! I had to click and enlarge it. So funny! I have a friend who is a mom of twins too and when we talk - it is hard for us to even chat. I remember once I let the girls play in a sink of water so I could just chat 5 mins. with her.

That's sweet! And I really needed that phone call so I appreciate you letting them put that soccer ball where it shouldn't be! You're an awesome friend and an amazing mom.

That's the funniest thing I've read all day! We all do things like that when we need some alone time!

Girlfriend I'm having blog withdrawal! I love reading about the adventures of the fabulous twosome! BLOG SOME WILL YA!? ;)

Even though we've never met, I miss hearing about your precious girls and your life! Haven't seen any new posts for awhile...hope y'all are doing ok!

Leslie
I've been married to Toby for seven years, and I am a mom to three-year-old identical twins, Catherine and Grace. Our days are filled with fun, laughter, and a few tears here and there. Sometimes the girls cry, too! Nothing could have prepared me for twins...but I wouldn't change a thing!